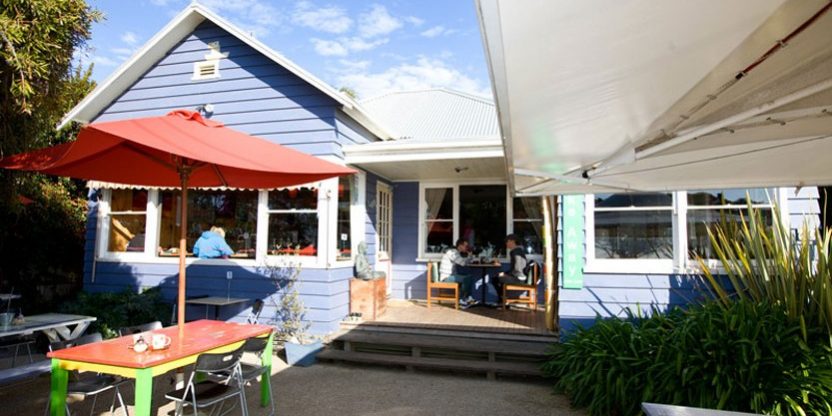 Cafe Moby could have the potential to be the top dining destination in Torquay.

The other night we decided to take our family, along with my visiting brother and his children, to Torquay’s Cafe Moby. We’d eaten there before, and apart from the long wait for our food, thought of it as Torquay’s best option for a laid back family meal.

The cafe is an interesting little spot, with a mix of eclectic decor, couches on the porch, a yard full of picnic tables, and a children’s playground complete with cubby houses and rockwall. It is the kind of place that brings back memories of backyard barbecues with friends, where kids roam free until well past dark and the adult’s conversation grows more animated with each round of cocktails.

Our visit was on a mild summer night, and we sat at an outdoor table listening to a wonderful “Andrews Sisters” type band jump from Going to the Chapel to Shakira’s Tango. It was the perfect environment for a relaxing dinner out. All we needed now were some refreshments and food.

Unfortunately, this is where Cafe Moby failed us for the second time.

At Cafe Moby, rather than each table being assigned a waitress, customers are required to order from a counter within the restaurant.  This system works well at some places, but here the tiny counter is staffed with a single person and register, and those in the queue are often in the way of people coming and going from the back of the restaurant. The upside is that by the time you’re next in line, there’s been more than enough time to decide what you’d like to order. Another downside was the poorly stocked wine list. The night we went Cafe Moby only had one selection out of three whites and three reds available. If you like a nice selection of wine with dinner, Cafe Moby is not the place.

Still in good spirits, though, we ordered, were given the bottle of wine, and waited for six wine glasses. An apologetic server than told us to return to our table and they would bring the wine glasses out shortly. For the next 15 to 20 minutes, we watched servers scouring other tables for empty glasses. Eventually, we went inside to inquire and saw a staff member hurriedly hand washing the four glasses they’d managed to recover. Back at the table, it was discovered–only after we poured the wine–that one of the glasses had a musty, dirty-dish smell. Another two glasses did eventually arrive, and one of our group decided it best to stick to her beer, so there was enough glassware to go around.

We were still enjoying ourselves, though. The kids were having a ball and the atmosphere and nice conversation were a good distraction from the wait. But then the kids started to notice they were hungry, which made us realise we’d ordered food over an hour ago. When it finally did arrive, we were so hungry that we’d lost our objectivity. At that point, pizza from the Chinese takeaway would have been delicious. I can at least say there were no leftovers.

The staff at Cafe Moby are friendly and willing to help, which partly makes up for the waiting and the disorganization.  My assumption is that the poor service is more to do with lack of infrastructure and a proper service plan.

It would be wonderful to see those basic problems ironed out, because with its laid back kid-friendly environment, helpful staff and location, Cafe Moby could have the potential to be the top dining destination in Torquay.