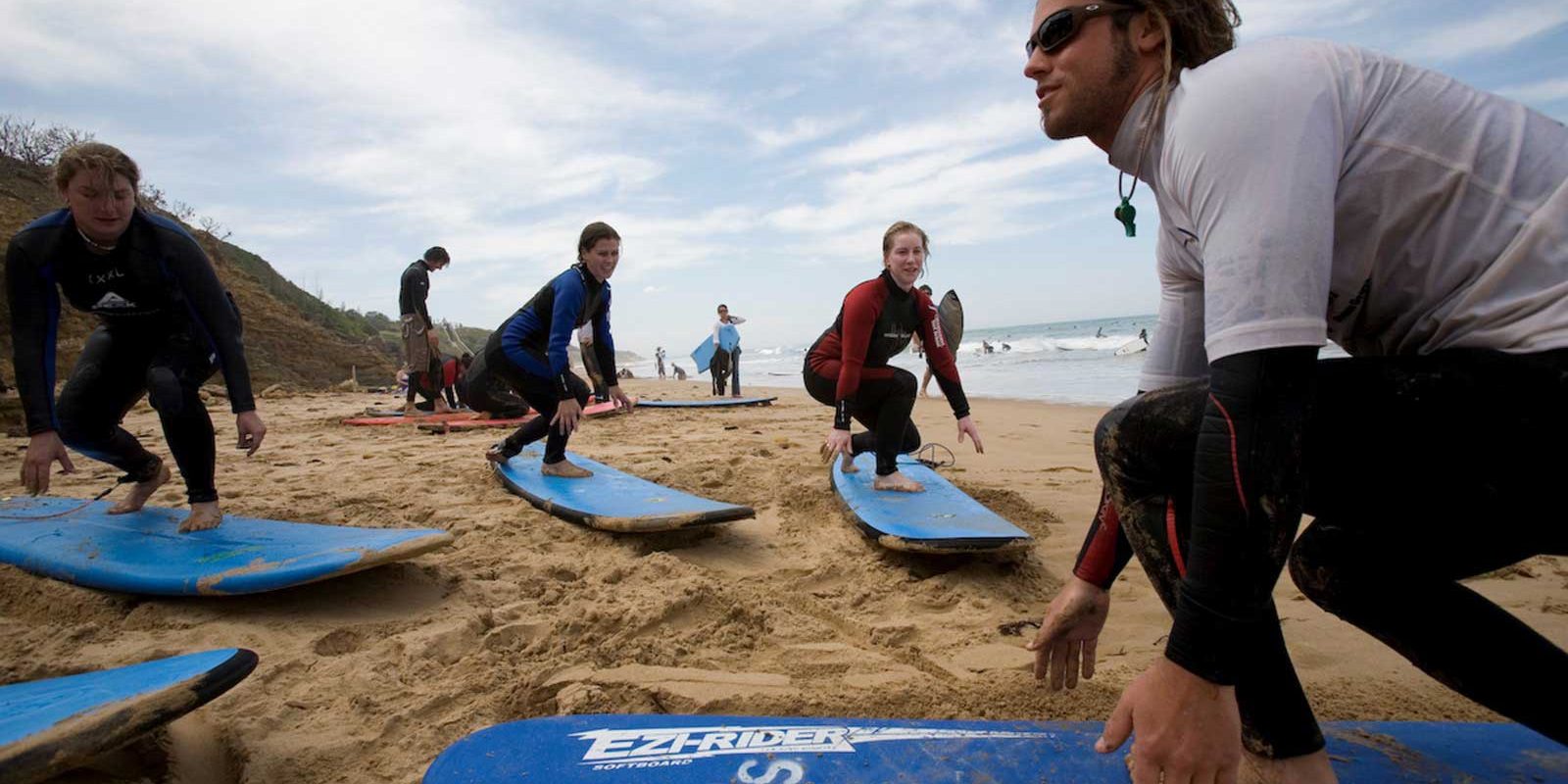 A perfect fall day in Torquay!

My partner, Richy, and I have recently moved to Torquay to help Stephen and Claudia at Whitesbeach Guesthouse. The job has been great and one of the best perks is a relaxed schedule that leaves plenty of free time to explore our new coastal home. When we first arrived we went for runs, bikes, and walks all throughout the town and up the coast as far as Jan Juc, we caught late summer rays at the beach, patroned a couple of the local food and drink spots, but the one activity we both couldn’t wait to get involved with, the one thing that made Torquay stand out before we even arrived, was the surfing.

When you move to the surf capital of Australia, it’s mandatory to embrace the local passion, right? With anticipation building for the 2014 Rip Curl Pro it seemed the perfect time to ‘get amongst it’.

After buying second hand wetsuits, getting our hands on a couple boards, turning a golf bag carrier found on the side of the road into a surf buggy, and walking the 45 minutes down to Torquay surf beach a few times, we’d officially caught the stoke. Perhaps the best thing about the sport of surfing is the well-worn adage that the best surfer in the water is the one having the most fun. I definitely don’t have the moves, but every time I get in the water it seems impossible to get back out.

The good thing about Torquay, though, is there’s plenty of surf stuff to keep you occupied on land, as well. If you’re visiting town, it’s worth making a short stop at the Surf World Museum. A $12 entry fee gives you a look at the origins of surfing in Torquay and the sport’s roots in Australian culture. I learned about the evolution of the surfboard in the museum’s boardroom, watched videos of locals and professionals sharing lessons learned from their experience at Bells, walked through the Australian Surfing Hall of Fame, and was especially entertained by a surf art exhibit displaying letters scrawled across old surfboards from a runaway ‘grom’ to his parents.

And then there’s the retail. Rip Curl and Quicksilver were both born in Torquay and the region has become a draw for many big-name surf brands. Along with the flagship stores, there are factory outlets jammed with discounted clothing and local board shops like Strapper. The other day, Richy and I followed a crowd up the road from the outlets to the Quicksilver offices, where, unbeknownst to us, there was a sample sale happening. Forty bucks later we walked out with two quality shirts and a brand new pair of DC shoes.

But of course, none of that matters, none of it would exist, without the wave that caught everyone’s attention. Bells Beach. And if it’s Easter in Torquay, it means the world’s best professional surfers have gathered there for the Rip Curl Pro. The event has been held every Easter since 1961, making it the longest running surf contest in the world, and people from across Victoria flock to the coast to witness the tradition.

I watched live from the webcast all week, and, when the day came that it looked like both a men’s and women’s champ could be named, I hopped on the bike and pedalled towards the action. Word spread that the bell would be rung and a crowd began to show up on what had been a quiet, mid-week, post-Easter morning of competition. The entry fee was waved and I made my way past the food stands and big-screen TVs down to the beach for the end of the men’s quarterfinals. After that, the remainder of the event was moved to Winki Pop, and I joined most of the other spectators in front of the big-screens to watch Mick Fanning and Taj Burrow battle for the win. The crowd seemed pretty pleased that the last men standing were both of the green and gold.

It was a perfect fall day sitting on that hilly car park above Bells, sun shining, happy families watching the event while their children ran off to surf the same break the pros had just vacated. The coolest moment for me was getting a spot right near the front of the crowd for the awards ceremony. On stage, members of the local Wathaurong community offered gifts and painted the faces of the top competitors. Then, bringing to a close another year at the Bell’s Beach invitational, Carissa Moore and Mick Fanning took their turns ringing the historic bell.